Iolair: Music and Song from Scotland 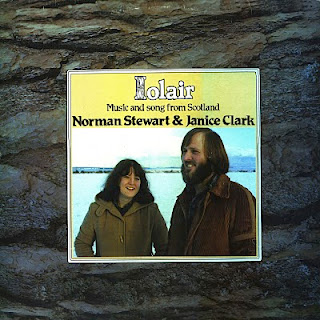 Iolair were Norman Stewart from Easter Ross and Janice Clark from Aberdeen. Janice's aunt, Lindy Cheyne, was a founder member of Aberdeen Folk-Song Club and introduced her to the scene at an early age. There she listened to some of the giants in Scots song: Jeannie Robertson, Lizzie Higgins, Jimmie MacBeath, etc. Her younger sisters Jenny and Kathleen followed Janice into the Scots music field (Jenny was once the singer in The Battlefield Band).

Norman Stewart, a forester by profession, was surrounded by Gaelic music and song as a child, and when he was in Edinburgh he frequented Sandy Bell's Bar in the company of Hamish Henderson and other highly influential people. Norman met and later married Janice Clark (later of the group Highland Tradition) at a North-East ceilidh and the partnership produced one record, Music and Song from Scotland, offered here.

Posted by themusicgatherer at 21:15 No comments: