The Cameron Men: Classic Scots Fiddle Recordings from the Thirties (1977) 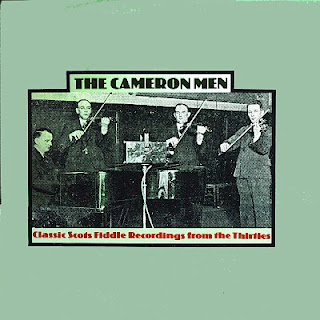 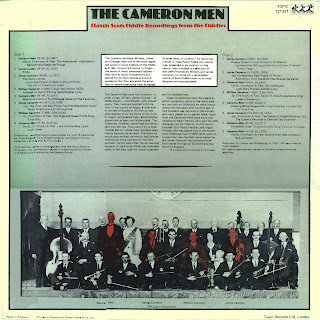 The Cameron Men: Classic Scots Fiddle Recordings from the Thirties (1977)

This is glorious music from the era of the 78rpm record. The Cameron Men from Kirriemuir in Angus were brothers William (Bill), James (Jim), George (all fiddles) and Stewart (piano) and were popular musicians throughout the area. They learned fiddle from a celebrated musician from Newtyle (10 miles from Kirrie) called John "Dancie" Reid, so called because of his ability to play fiddle and dance and the same time. It was William who achieved greatest success early on, winning several fiddle contests in the late 1920s and early 1930s. He was the first brother to be recorded, travelling to London in 1931 to Edison Bell Ltd studios. Within a couple of years, the four brothers were recorded together under the name The Cameron Men for Scots label Beltona Records, and in various line-ups, solo, as an ensemble, and as part of Dancie Reid's bands, they compiled a decent recorded output.

James Cameron also recorded solo, but it was as leader of the Jim Cameron Band, who recorded some sixty sides for Beltona in the 1940s and 50s, that he is most well known.

William's son Angus Cameron became a well-known fiddler in his own right in the 1970s and 80s.

Posted by themusicgatherer at 10:44 4 comments: 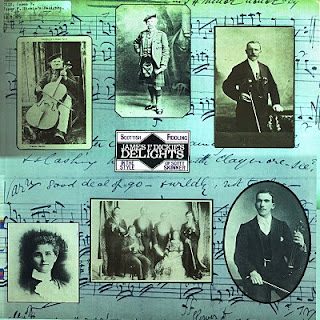 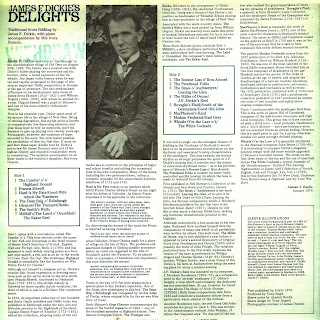 The only recordings we have of Jim Dickie (1886-1983) are from tapes he recorded for his own amusement in the early 1950s. They were remastered and released on this LP in 1976, and a few more on a cassette which came out in 1980 (The Dickie Style). The quality is not perfect, but it affords us the chance to hear a significant Scottish fiddler of the early 20th century. His style is very much of the James Scott Skinner mode, and therefore doesn't always fit in with how our modern ears perceive fiddle music, but you can hear that Dickie was an extremely accomplished player, even if these recordings were made when he was past his prime (Dickie was performing at the turn of the twentieth century with other fiddlers and his brother John, a champion tin whistler). At the very least, this is a document of a bygone style of North-East fiddling. 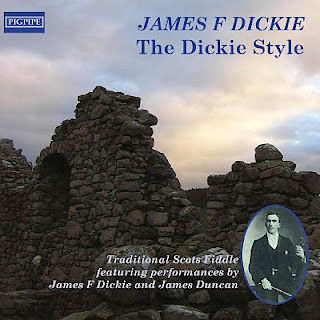 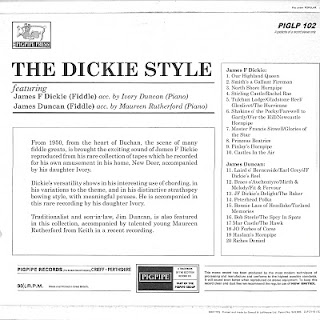 Jim Dickie was born in New Deer, Aberdeenshire in 1886. His father was a concertina player, and his brother John was a champion penny whistle player. By the age of seventeen he had started winning fiddle contestsAs a fiddler his biggest influences were James Scott Skinner, whom he knew, and Bill Duguid of Aberdeen. His style is very much in the Skinner camp, and is very much of its time, not always easily accessible to modern ears, but there's no doubt he was a very accomplished player. His friend J Murdoch Henderson wrote of him, "A player of great taste and polish. In the rendering of slow strathspeys and E flat airs in general his style is inimitable." This recording consists of his own home recordings from the early 1950s, complemented by tracks from his son-in-law James Duncan, and was issued on cassette in 1980.

Posted by themusicgatherer at 10:35 2 comments: 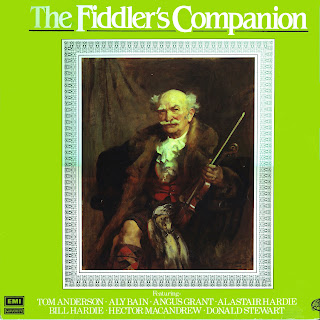 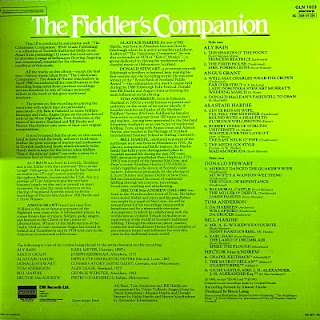 This was released as a companion to a book of fiddle tunes, The Caledonian Companion (there was already an LP of that name, so they had to come up with something else). It's simply a small collection of tracks from some of Scotland's top fiddlers of the time. The LP kicks off with Aly Bain playing a couple of wonderful sets, and continues at a very high standard. Other fiddlers featured include Angus Grant from Fort William, Tom Anderson from Shetland, Hector MacAndrew from Fyvie, Donald Stewart from Edinburgh, Alastair Hardie and Bill Hardie from Aberdeen. Because MacAndrew died just before he was due to record the tracks for this LP, they have used some earlier recordings from the 1960s. 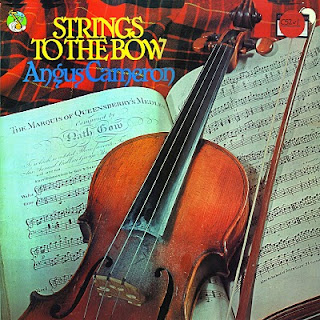 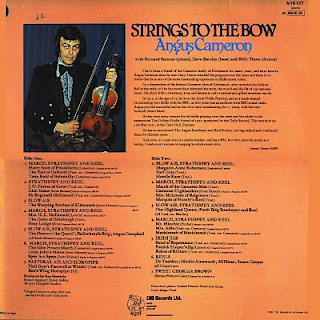 This was Cameron's follow-up to his first solo LP, Bow to the Fiddle (1975) and it has him on top form playing the music he obviously loves. Steeped in the fiddle tradition of the county of Angus, Cameron displays an understanding of the genre. Cameron's father Will Cameron had travelled to London in 1931 to record some solo sides for Edison Bell records, and twee years later again, this time with his brothers James and George (fiddles) and Stewart (piano), recorded a number of solo and group efforts. These records have been re-issued in LP format.

Posted by themusicgatherer at 22:31 No comments: 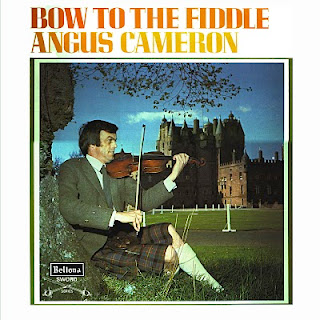 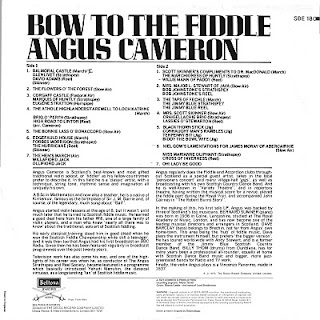 During the 1930s there was a group of three brothers in the county of Angus called The Cameron Men, who performed and recorded Scottish fiddle music. Angus Cameron of Kirriemuir was born into this family, and learned fiddle from an early age from one of the Cameron Men, his father Will Cameron. In 1952 Angus won the Alyth Fiddle Festival at the age of 17, and soon afterwards the Scottish Fiddle Championship, starting an illustrious path through Scottish fiddle circles. As well as playing with his own dance band, he has appeared on numerous television programmes and reformed the Angus Strathspey and Reel Society.

Posted by themusicgatherer at 16:05 No comments: 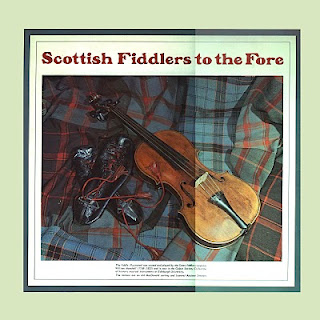 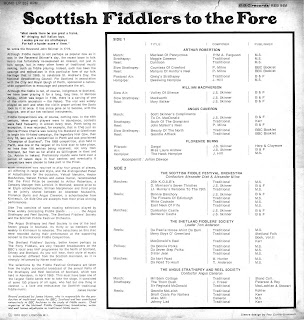 This record is old and not in top condition, so there's a lot of pops and crackles. The reason for posting it, however, is the rarity and the standard of fiddle playing.

This album is a live recording of the winners of a one-off fiddle competition held in Perth in November 30th 1969. The judges there were Yehudi Menuhin, Hector MacAndrew, Watson Forbes and James Hunter (Hunter later notated some of the pieces on this record for his book The Fiddle Music of Scotland).

First prize was given to Arthur Scott Robertson of Shetland, who went on to record two LPs using his title: Champion's Choice and Scotland's Champion Fiddler. Second was William MacPherson of Elgin giving an incredible performance of Scott Skinner's Valley of Silence. Third equal went to Angus Cameron of Kirriemuir, who is a descendant of the Cameron Men who were fiddle recording artists in the 1930s, and Florence Burns from Aberdeen.

The second side of the LP features a small selection of fiddle orchestras; I have not included these in this download.

Posted by themusicgatherer at 13:00 No comments: 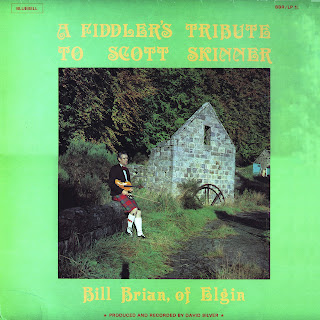 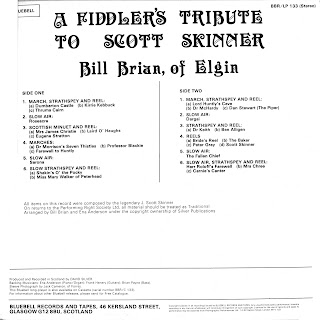 Bill Brian is from Elgin and has been involved with the Scots fiddle scene for many years as a performer, teacher and organiser. He is currently leader of The Elgin Strathspey and Reel Society, a post he took over from the great fiddler Willie MacPherson, also of Elgin. Brian is also a member of the Colin Donaldson Scottish Dance Band. On this album he is accompanied by Ena Anderson (later Ena Brian) on piano and organ, Frank Henery on guitar, and Brian Payne on bass. All the tunes on the LP were composed by James Scott Skinner.

Posted by themusicgatherer at 12:21 No comments: 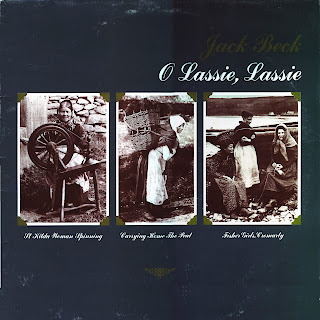 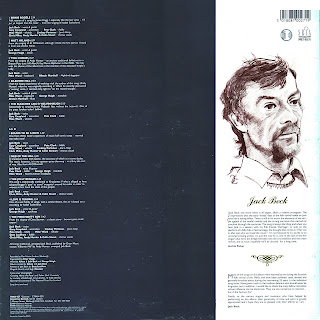 When Jack Beck was asked to record a solo album im the late 1980s, he got the rest of the current line-up of Heritage to play on the album with him. The result is a splendid collection of songs with tasteful accompaniment, and anyone interested in Scots folksinging will be delighted with this.

Posted by themusicgatherer at 14:56 3 comments: 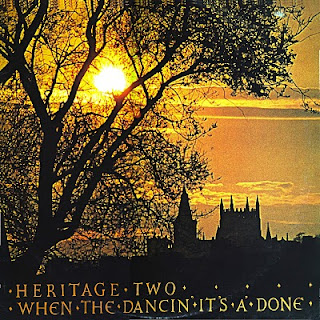 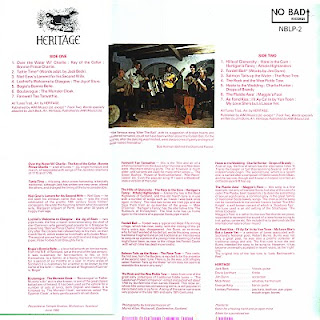 This, the second Heritage album, is a marked difference to the first. By this time the group was down to a six piece: Jack Beck (guitar, vocals), Davy Lockhart (fiddle), Jim Dunn (accordion), George Haig (banjo, guitar) and Lindsay Porteous (jaw harp, bodhran, pan-pipes, mouth organ, bones) were joined by Mike Ward (whistles and harmonium). 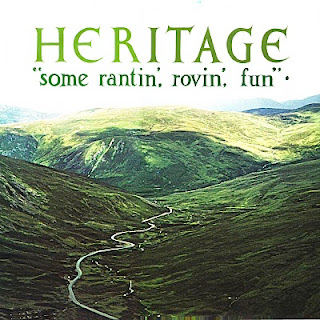 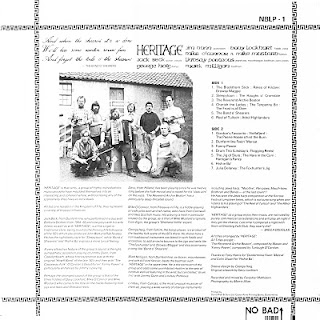 Heritage were a band regarded with some affection within the Scottish folk scene. They were born out of folk clubs and pub sessions in the mid-1970s and centred around Dunfermline in Fife. Founder member Jack Beck had been singing for years, solo and with fellow Fifer Barbara Dickson (1964-66). Other participants of the club scene who became part of the earliest Heritage were Jim Dunn (accordion), Davie Lockhart (fiddle), Mike o' Connor (fiddle), Mike Mustard (fiddle), Lindsay Porteous (jews harp, mouth organ, bodhran), George Haig (banjo) and Mark Milligan (bodhran). This line-up recorded this first Heritage LP, and unfortunately the recording quality is terrible; it was recorded quite primitively in a Fife village hall. I believe it was never meant to have been released, but served as a cassette souvenir for band members. However, it was 'remastered' and published in 1980 on No Bad Records. If you can get past the recording, the music is worthwhile, albeit a little like listening in to the local pub session. 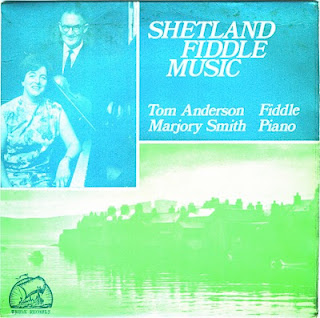 This is an EP (extended play 45rpm record) published in about 1970 by a small Shetland label called Thule Records. Being an old record, it's a little scratchy, but the sheer magnificence of Anderson's playing obscures any background noise. As usual, the tracks are a mixture of traditional Shetland tunes and pieces from the Scottish repertoire. Anderson performs both with, in my opinion, brilliance. This is an absolute treasure of a recording - enjoy!

Posted by themusicgatherer at 09:33 3 comments: 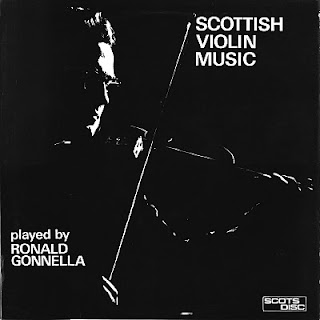 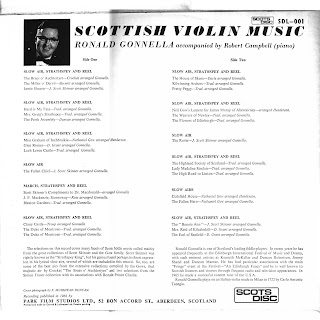 I don't know as much as I'd like about the late Ron Gonnella. He taught at Morrison's Academy in Crieff, Perthshire, but I haven't met anyone who knew him. What little I know is here is gleaned from record sleeves.

Ron Gonnella's great grandfather was a Robert Dewar from Perthshire, who was a shepherd near Tulliemet in Perthshire. Gonnella was from Dundee originally, and played in the Scottish Dance Band circuit with the bands of Jim Johnstone and Anrew Rankine. He had his own band for a while - featuring Iain MacPhail on accordion - but it was as a solo artist that he toured all over the world promoting Scots fiddle music. He recorded many albums (I have twelve different records) and I think this one was his first solo recording.

The instrument Gonella played was a 1722 Italian violin made by Carlo Antonio Tanegia. I have been told that after his death there were a number of fiddlers desperate to try it to achieve the same wonderful tone that Gonella produced; in the end it turned out to be a mediocre fiddle, and it was the musician who was special, not the instrument.

Posted by themusicgatherer at 18:02 No comments: