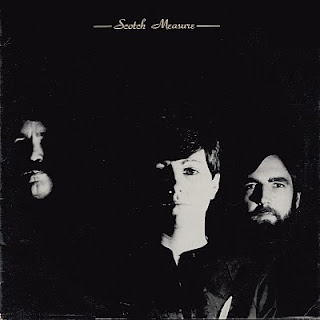 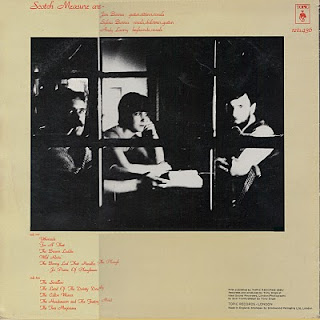 Scotch Measure were Jim Barnes (guitar, cittern, vocals), Sylvia Barnes (vocals, dulcimer, guitar) and Andy Lavery (keyboards, vocals), and the group were based around Sylvia's voice. She and her husband Jim had been in Glasgow group Tinkler Maidgie, then Kentigern, before a tour of duty with The Battlefield Band.

Unavailable
Posted by themusicgatherer at 15:59 3 comments: 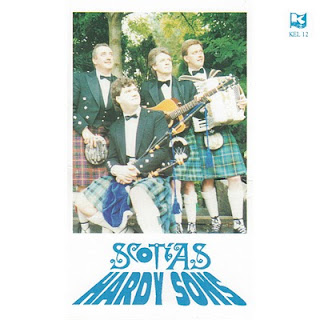 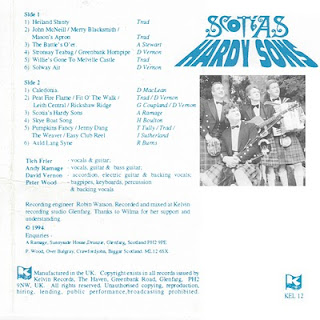 Scotia's Hardy Sons were Tich Frier (vocals, guitar), Andy Ramage (vocals, guitar, bass), David Vernon (accordion, electric guitar, vocals) and Peter Wood (bagpipes, keyboards, percussion, vocals). Frier and Ramage first came to prominence in the 1970s as part of harmony singing trio Bitter Withy, and later as New Alliance with Isla St Clair. Tich has followed a solo career since, while Andy has appeared in many combinations and groups, including Harness and Cairdeas. As far as I know, this was their only recording.

Other posts featuring Andy Ramage:
Harness: One for the Road (1987)
Posted by themusicgatherer at 13:25 1 comment: 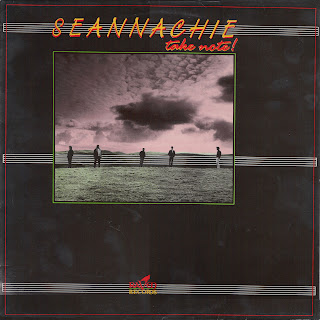 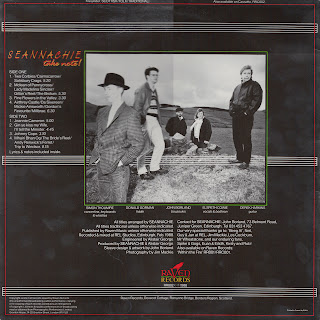 By Seannachie's second album Take Note, the only original member was John Borland (bouzouki). Newer members Simon Thoumire (concertina, keyboards, whistles), Donald Gorman (fiddle), Elspeth Cowie (vocals, bodhran) and Derek Harkins (guitar) combined with Borland to release this record, which has a different feel to the first (Within the Fire): gone are the Irish instrumentals, to be replaced with a staunchly Scottish repertoire, and the interplay between Thoumire's concertina and Gorman's fiddle produces a unique sound. 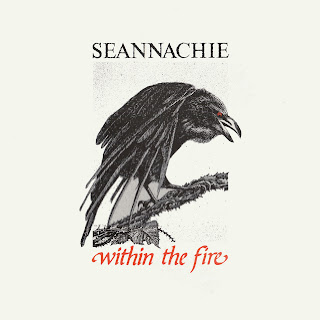 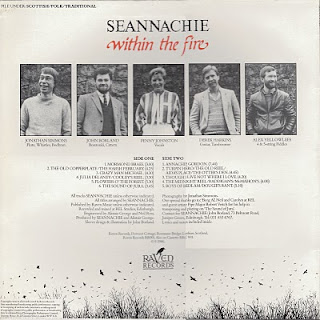 Seannachie had a long performing career and were one of those bands whose line-up was practically in constant change. Formed in the early 1980s by John Borland (bouzouki, cittern), Alex Yellowlees (fiddle), Martin McGarrity (flute, whistle, bodhran, vocals) and Gordon Irvine (guitar, mandolin, harmonium, whistle). They recorded their first album, Within the Fire in 1986, by which time the band consisted of Borland, Yellowlees, Jonathan Simmons (flute, whistles, bodhran), Penny Johnston (vocals) and Derek Harkins (guitar, tambourine). Two more albums followed, along with more personnel changes and European tours. 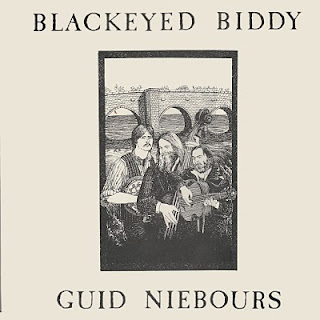 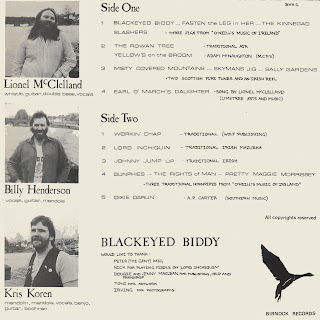 This was Blackeyed Biddy's first album and featured Lionel McClelland (whistle, guitar, double bass, vocals), Billy Henderson (vocals, guitar, mandola) and Kris Koren (mandolin, mandola, vocals, banjo, guitar, bodhran), with "Nick" playing fiddle on one track. There is no date anywhere on the sleeve or record, but I estimate it at mid-1980s.

Posted by themusicgatherer at 16:19 No comments: 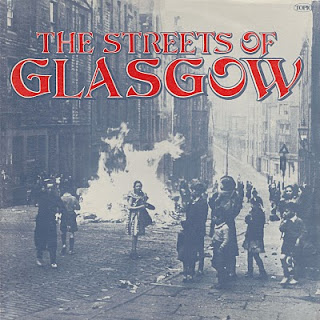 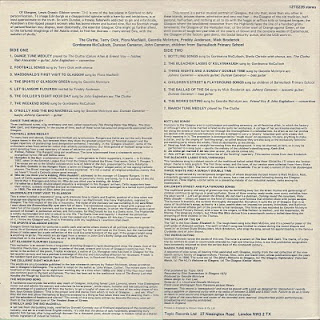 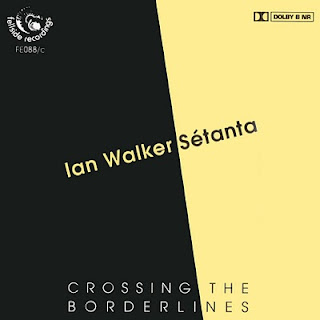 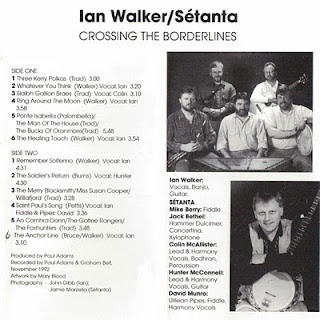 Setanta had a few line-ups; this one featured core members Jack Bethel (hammer dulcimer, concertina, xylophone), Colin McAllister (vocals, bodhran, percussion) and David Munro (Uillean pipes, fiddle, vocals), with Mike Berry (fiddle),  and Hunter McConnell (guitar, vocals). Munro, Bethel and McAllister played sessions in Glasgow and Lanarkshire in the early 1970s and were part of scratch-band Not the Full Shillin'. Setanta were also born out of sessions in the mid-1970s, They recorded two albums, Setanta (1988) and this one in 1992. Reflecting the Glasgow session scene, most of the tunes that Setanta played were in fact Irish.

Jimmy MacFarlane was the fiddler in the Jim MacLeod Band, who were extraordinarily prolific in their recorded output. Their act, which they performed live in venues such as Dunblane Hydro and also on radio and television programmes, consisted of a mix of Scottish Country Dancing and lounge-bar crooning from Mr MacLeod himself.

As well as fiddle, Jimmy played vibes and penny whistle, and it is his whistling featured on many of the Jim MacLeod records. Unfortunately no available records exist of one of Scotland's forgotten whistlers.
Posted by themusicgatherer at 16:18 No comments: 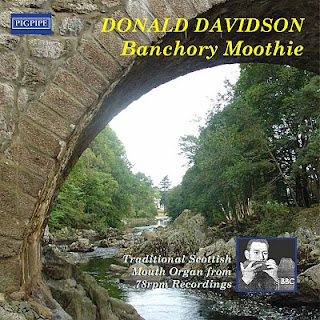 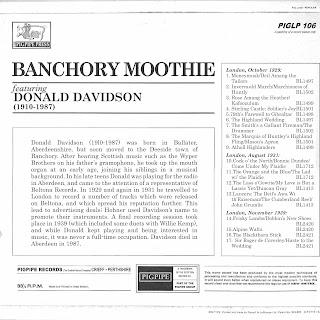 Donald Davidson (1910-1987) was born in Ballater, Aberdeenshire, but soon moved to the Deeside town of Banchory. After hearing Scottish music such as the Wyper Brothers on his father's gramophone, he took up the mouth organ at an early age, joining his siblings in a musical background. In his late teens Donald was playing for the radio in Aberdeen, and came to the attention of a representative of Beltona Records. In 1929 and again in 1931 he travelled to London to record a number of tracks which were released on Beltona, and which spreads his reputation further. This lead to advertising deals; Hohner used Davidson's name to promote their instruments. A final recording session took place in 1939 (which included some duets with Willie Kemp), and while Donald kept playing and being interested in music, it was never a full-time occupation. Davidson died in Aberdeen in 1987.

Posted by themusicgatherer at 11:56 3 comments: 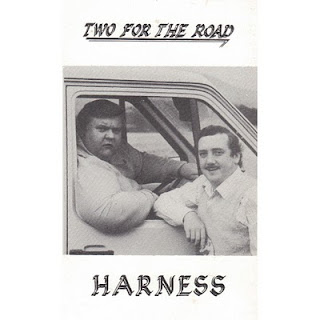 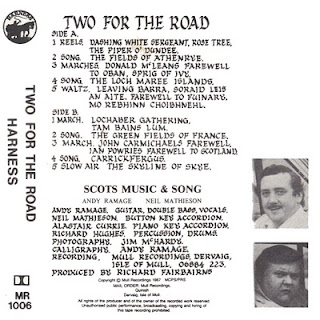 Harness were Andy Ramage, a singer of Scottish songs who was a member of the well-regarded harmony group Bitter Withy, and button accordionist Neil Mathieson, helped out by Alastair Currie on piano accordion and Richard Hughes on drums. As far as I know, this was their only recording. 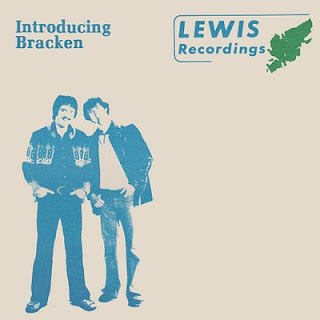 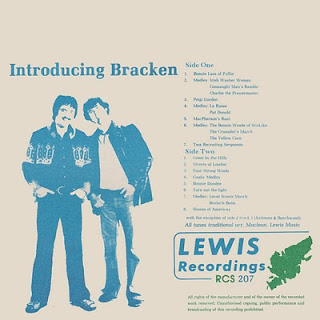 There is very little information on the sleeve of this recording, and I don't know much about this duo. Bracken were Ian Macintosh and Morris Macleod. At least one played guitar, and one played banjo and mandolin; both sang. Macleod may have gone on to play with Thurso-based band Whisky (www.whisky-band.co.uk). 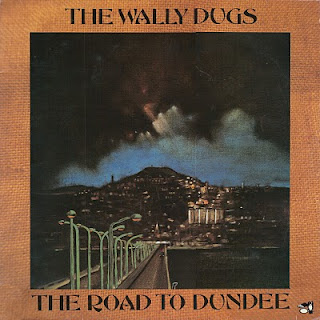 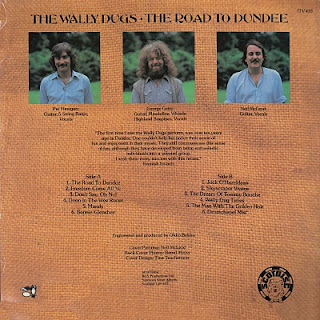 The Wally Dugs were Pat Finnegan (guitar, banjo, vocals), George Getty (guitar, mandolin, whistle, bagpipe, vocals) and Neil McLeod (guitar, vocals) and were from Dundee. Apart from that, I know nothing about the group. They were extant in 1976/77 and I imagine they were a popular pub band in the area. 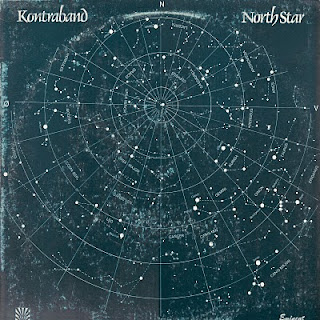 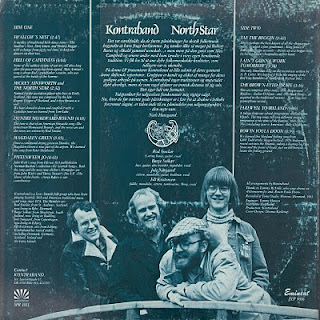 Rod Sinclair (banjo, guitar, vocals), from St Andrews, was the lead vocalist of this Scottish-Danish folk group, based in Denmark. The other members were Danes Borge Solkaer (bass, guitar, recorder, mandolin, vocals), Jole Norgaard (cittern, mandolin, guitar, bodhran, vocal) and Filt Kristensen (fiddle, mandolin, cittern, tambourine, Moog, vocals). As far as I know, this was their only album, released in 1983.

Unavailable
Posted by themusicgatherer at 16:03 No comments: 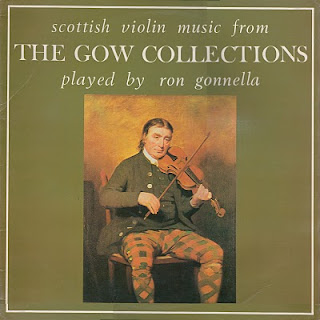 After his 1966 debut solo record, it took another seven years for this second Ron Gonnella solo album, but it was well worth the wait. Here we have Gonnella playing the music he loved while at the top of his game. The music is mostly from the eighteenth century, all published in various collections from the Gow family: patriarch Niel Gow, famous fiddler in his day; his sons Nathanial - who took on his father's mantle - William and Andrew.