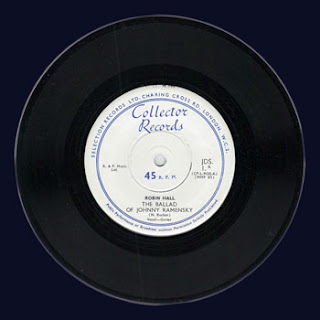 Robin Hall featured in the folk revival of the late 1950s in London. Originally from Edinburgh, he was one of a number of Scottish exiles in the capital. He combined with another Scot, Jimmie Macgregor and together they became the most successful folksingers in the country for many years.

Johnny Ramensky was a safecracker who spent more time behind bars than in freedom. His persona was as someone who could escape from any jail - he certainly did escape a few times, but the fact that he spent a total of forty-odd years in prison does not indicate a Houdini-type character!