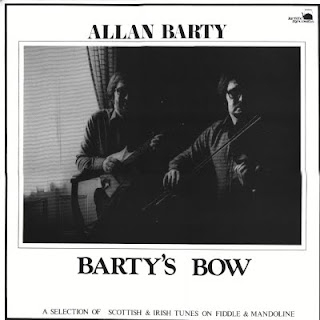 A celebrated Dundee mandolinist and fiddler, Allan Barty was in some ways a Scottish Dave Swarbrick, but he didn't reach the same level of success. Barty was a prominent member of the Dundee folk scene. Allan's first group was Barty's Bow, formed in Dundee in 1966, after which played in a number of Tayside groups, such as The Inn Folk, and appeared on television and radio, and toured with acts such as Tommy Makem & Liam Clancy. In 1971 he was considered as a replacement fiddler in The JSD Band after Chuck Fleming left. He recorded this single solo LP:, and was rumoured to have moved to Germany and presented a folk radio programme. He had appeared on more than forty records by the late seventies.

This, as far as I know is his only solo recording, and it's a beauty. It's all instrumental, with fiddle just winning out over mandolin, although many tracks are double-tracked with both. He is helped out on the album by Archie Fisher, Brian Miller and Robin Morton, and it was produced by Artie Tresize.