The Quinns at Linlithgow (n.d.) 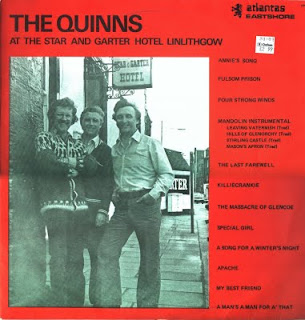 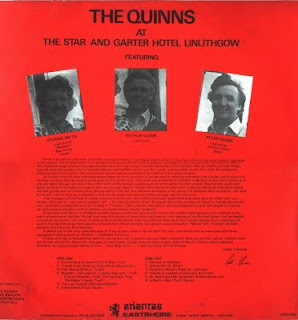 There are times when the lines between folk music and pub cabaret are blurred, and The Quinns are a perfect example. On this, their only recording (as far as I know), they combine some folk standards and instrumentals with contemporary pop songs (The Shadows' Apache seems particularly incongruous). The origins of this LP was in the regular sing-songs at the Star and Garter Hotel in Linlithgow, where the Quinn family would be rendering their favourite songs. Brothers Peter and Arthur Quinn recruited George Smith, and started being engaged professionally. They did a six month residency at the Star and Garter

This will never be a sought-after relic of seventies folk music, but as a snapshot of what was happening in bars and hotels round Scotland at the time, it is of historical value.

Unavailable
Posted by themusicgatherer at 20:02