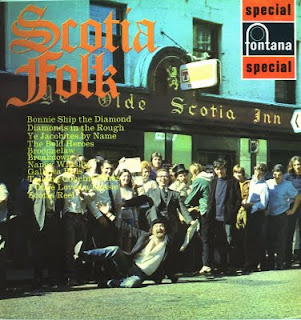 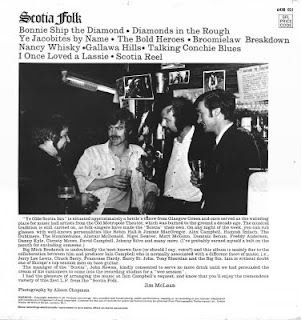 This is a bit of a mystery, because there are no definite credits on this LP. The Scotia Bar in Glasgow was a hang-out for folkies in the late 1960s, and this purports to be an album of music from some of the professional folkie regulars. However, I can't place the singers. I think I recognise Alastair MacDonald in a couple of the tracks, but most of them leave me puzzled. Any help here would be appreciated.

The front cover features Alex Campbell in front of a crowd outside the bar (according to Jim McLean his wife took the photos, and Billy Connolly was behind the camera). The back shows four recognisable people at the bar: Danny Kyle, the producer Ian Campbell, the late Mick Broderick and the arranger of the music Jim McLean.

The music is typical fare - folk standards, a couple of American-style songs and a couple of instrumentals.

Unavailable
Posted by themusicgatherer at 22:05