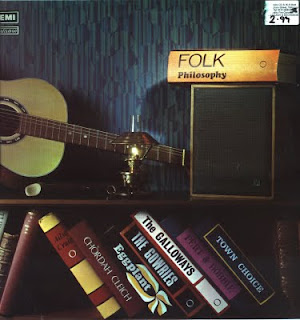 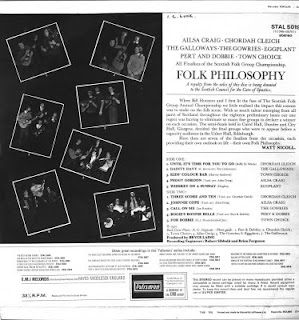 Folk Philosophy (Talisman STAL 5019, 1971)
"Folk Philosophy" was the result of a Scottish Folk Group Championship, the dreamchild of Bill Houston and Watt Nicol. There were an astonishing eighteen heats, with semi finals being held in Glasgow and Dundee, and the grand final in the Usher Hall, Edinburgh, with The Corries as guest artists. All proceeds went to the Scottish Council for the Care of Spastics.
I have been told that the winners of the Championship were The JSD Band, whose prize was an album deal and contract with EMI. The winners of the heat held at Perth City Hall were Bitter Withy. They won £50 but couldn't take part in the semi-finals because of work commitments.
The other seven finalists were featured on this LP and received six month contracts.
The Gowries (1969-1973)
Forfar-based The Gowries first got together in the summer of 1969. Brian Hendry and Dave Fyfe had been in The Anchor Folk Four until they split. They met Ian Lamb (who had played before in The Shannermen) and Elaine Nicoll through the Forfar Folk Club. They played a mixture of traditional and contemporary material and were resident at the Forfar Folk Club at the time, where Ian was president. They played a lot in Tayside and Fife playing mostly contemporary folk along the lines of The Seekers and toured a bit with Watt Nicoll and Whisky Fizz. Latterly they were playing mainly pubs (where the money was) and switched to electric guitars and bass doing chart cover stuff. The Gowries played their last date in September 1971 when Dave went off to Edinburgh University. Brian and Elaine continued singing as a duo. The group reformed in December 1972 for a special one-off appearance supporting Watt Nicoll. The Gowries came 6th in the Scottish Folk Group Championship.
Eggplant
Originally called Arizona Eggplant, this threesome came from Lochee, Dundee. After a line-up change, they went back to being called Arizona Eggplant and were resident at hotels in Arbroath and Broughty Ferry. The lead singer was Willy McNally.
Town Choice
This trio was from Edinburgh. Shortly afterwards two members of the group formed a band called Both Sides (unrelated to the Dundee-based group of the same name). Lead singer of Town Choice, Harry Cullen, is now manager of the Oxford Bar in Edinburgh
Chorda Cleich
A quartet from Edinburgh. In 1971 they dropped the "Cleich" and were known simply as Chorda. Lead singer John Croall later helped form Jock Tamson's Bairns. Chorda Cleich came 3rd.
The Galloways
From Edinburgh. Member George Grant moved to Dundee and joined Both Sides. The Galloways came 5th.
Ailsa Craig
This group met when they were all students at Strathclyde University. The group consisted of William Devine, Frank McArdle, Frank D'Ambrosio and Arthur Loughran.
Pert & Dobbie were from Clydebank.
01 Chorda Cleich:-Until It's Time for You to Go
02 The Galloways:-Dainty Davy
03 Town Choice:-Kid's Colour Bar
04 Ailsa Craig:-Peggy Gordon
05 Eggplant:-Whiskey On a Sunday
06 Chorda Cleich:-Three Score and Ten
07 Ailsa Craig:-Johnnie Cope
08 The Gowries:-Call On Me
09 Pert & Dobbie:-Bogie's Bonnie Belle
10 Town Choice:-For Bobbie
Front and back covers included.
Download
Other posts featuring Chorda Cleich:
Various Artists: Sandy Bell's Ceilidh (1979) (As Chorda)