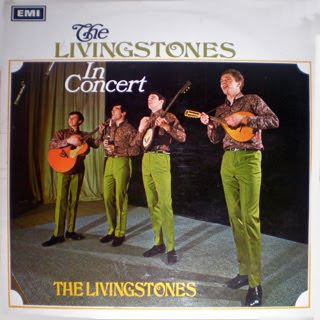 The Livingstones were from the Hamilton/Blantyre area of Lanarkshire, Scotland and were all university graduates (three having gone to Strathclyde, one to Glasgow uni). The "anchor man" was Frank McKay, while his brother Ken McKay was the most versatile musician with several instruments in his battery. David McCabe, "one of the most glorious singing voices in folk music", played chanter and was an expert in Burns, and John Dempsey.

In 1965 the group was playing on the folk boat which sailed between Glasgow and Rothesay, and The Corries wrote of them, "Their sensitive arrangements class them as talented musicians". They toured throughout Britain during 1965-68, appeared on television in France, and supported Tom Paxton on tour. In 1968 they recorded this live album from Hamilton Town Hall, and the following year a studio album, "The Livingstones I Presume".

Frank McKay became a history teacher, and ran his school's folk club during the 1960s. There was a much later report of him selling calculators in Paris. Ken McKay married and settled in Dundee. There he played gigs with banjo player John McGuire, and then joined long-established local group The Taysiders. I heard from John Dempsey's daughter that he died of cancer in 1999.

Back and front covers included.